— Written by Timothy A. Griswold

​Modern Society and the Impacts of Stress

The pace and nature of modern life, while providing numerous benefits, has also brought about a wide variety of chronic illnesses and work-related ailments unique to our times. Such illnesses can often be traced to the long-hours planted behind desks and in front of computers.
Ironically, the very technology intended to make our lives easier has, if anything, compounded our daily stressors. Along with dramatic increases in the pace and volume of our work, as well as the time we are expected to devote to it, the range of movements made by most modern professionals throughout the day has also become severely limited.
In fact, few professionals are immune to the devastating effects of this one-two punch. Engineers, lawyers, accountants, and real-estate professionals, to name a few, are all invariably subject to the dangerous combination of restricted movements and increased stressors.
A wide variety of associated health issues has seemingly arisen in tandem with these conditions, such as, among many others, high blood pressure, insomnia, migraine headaches, chronic anxiety, depression, exhaustion, memory issues, obesity, deteriorating vision, sore muscles, bone/skeletal issues, immune system disorders, etc. The list can go on and on.
Stress also tends to dramatically impact our work efficiency, often causing those subject to it to unduly fixate on unimportant details of problems at the expense of seeing the big picture and addressing the core issues involved.
In effect, stress is a major poison, seemingly inextricably integrated into modern society and leading to a wide variety of mental suffering and psychosomatic illnesses.

Fortunately, as with most poisons, antidotes exist. Tai Chi Chuan (“Tai Chi” for short), if practiced correctly, is one such antidote.
Modern science has proven that the practice of Tai Chi can help to reverse and even cure all of the above-mentioned chronic illnesses.
Numerous Western medical studies have shown that the practice of Tai Chi can, among other things, improve balance, leg strength, arterial health, muscular elasticity, joint flexibility, and insomnia, as well as significantly enhance the general functions of our immune systems, to name a few of its many benefits.
Tai Chi is not simply geared at alleviating the symptoms of such types of issues, however; it is specifically aimed at curing their underlying causes. According to Eastern medicine, the source of many, modern- day chronic illnesses is the blockages caused in our bodies’ energy pathways (or “meridians”) by long- term stress, which fundamentally compromises our immune systems.

Through the practice of movements in accordance with Tai Chi principles, however, our energy pathways can be systematically unblocked and re-opened. This helps slowly reduce our bodies’ stress, allowing our immune systems to regain full functionality and our central nervous systems to regenerate.
Anecdotally, many serious Tai Chi practitioners quickly notice improvements in mood, self-confidence, memory, concentration, coordination, and also a general sense of well-being.
Science aside, it seems no mystery that the antidote for mental and physical health issues caused by the combination of restricted daily movements and chronic stress is the practice of movements specifically designed to increase movements, decrease stress, and to promote energy.

The Major Styles of Tai Chi

There are many different styles of Tai Chi. Among the more commonly practiced styles in modern times are the Chen, Yang, Wu3, Wu2 (i.e., said using a third and second tone, respectively, in Chinese), and the Sun styles.
Another, increasingly popular style of Tai Chi is the Zhaobao style (referred to less frequently as the “He” style).

Zhaobao Tai Chi originated over four hundred years in the Zhaobao village, located in China’s Henan province. The Zhaobao village is very close to the village of Chen Jia Gou, where the Chen style of Tai Chi originated. Despite similarities between the Chen and Zhaobao styles, the Zhaobao style is an independent style of Tai Chi. Its origins can be traced all the way back to the Daoist monk named Zhang San Feng, who is considered to be the original founder of the “internal family of martial arts.” This simply refers to a category of martial arts that relies on internal energy or “qi” (pronounced “Chee”) instead of the use of muscular power.
Although Zhaobao Tai Chi was a carefully guarded secret for many years, it began to spread in the 1950’s after two prominent teachers moved from the Zhaobao village to the city of Xi’An China. Prior to that time, a common expression was that “Zhaobao Tai Chi never leaves its village.”
Despite the fact that Zhaobao Tai Chi only began spreading relatively recently, having stayed true to the origins of Tai Chi over the many years, it is one of the most ancient and traditional styles of Tai Chi practiced today.

In truth, all of the major styles of Tai Chi can be highly effective types of martial arts as well (in addition to their health benefits, as mentioned above), as long as they are taught in a manner that is true to their traditional origins.
Unfortunately, in modern times most Tai Chi teachers and students alike practice very watered down systems of Tai Chi. Due to such, a common misconception about Tai Chi is that it is only something for the elderly or the sick to practice in parks, etc., to improve their flexibility and health. This misconception is likely due to the pervasiveness of such practices, which are often extremely hollowed- out versions of their traditional origins. Such park versions are easier to learn for sure (a fact that very

likely accounts for their rapid spread), and are definitely preferable to not moving at all, but the traditional practice of Tai Chi can offer so much more.
While it typically takes a much longer period of time to master Tai Chi than to master other external styles of martial arts, top practitioners of traditional Tai Chi styles are often some of the best martial arts practitioners in the world. True Tai Chi masters can, in fact, perform phenomenal feats that almost seem like magic to those who don’t understand the underlying principles at work.

While entire volumes can and have been devoted to this topic, essentially, mastering Tai Chi requires the long-term cultivation of the body’s natural internal energy, or “qi,” as mentioned above, through the application of correct body mechanics.
All living creatures have internal energy or “qi.” If they didn’t have such, they wouldn’t be alive. In most living beings, however, that energy is present in a much weaker form than our bodies are capable of producing, storing, and using. Due to China’s unique history, with its grounding in Daoism and Buddhism, along with their associated meditation practices, the ancient Chinese long ago discovered and systematically (one can even say “scientifically”) began to develop exercises to better understand, cultivate, and expand this natural energy.
Just like an average person can’t expect to walk into a gym without ever having trained before and immediately begin to bench press 300 pounds, the cultivation of internal energy isn’t something that just naturally happens. It instead must be developed systematically by training the body to move in ways specifically geared to open up, and keep open, the body’s energy pathways, as well as to generate the energy that flows through these open pathways in ever greater amounts over time.
Just like crops will wither if irrigation ditches meant to provide water to them become blocked, many people’s energy pathways also become blocked over time due to stress, poor postures, bad habits, and negative emotions, etc. Once we learn to unblock these pathways, however, through correct movements and mindfulness, our energy can begin to flow again. Just like water flowing through irrigation ditches can cause withered crops to begin growing again, this energy can also help to re- nourish parts of the body that have begun to fail due to chronic stress.
Through the careful cultivation of energy, the central nervous system, among other systems, can start to heal itself and rebuild. This helps to increase our minds’ connections to our bodies, which in turn allows our bodies to react to the movements willed by our minds, making our movements quick, agile, and coordinated.
The correct cultivation of internal energy also leads to increased blood flow. In fact, the terms “energy” and “blood” are frequently used in conjunction with one another when describing the internal mechanism of Tai Chi. This increased blood flow provides much needed nourishment to our internal organs. In the way of one example, increased blood-flow to the brain through these exercises improves memory, clarity, and mood.
Moreover, Tai Chi exercises teach our bodies to relax and to engage only the muscles that are minimally necessary for correct posture and movements. This helps to improve the body’s overall efficiency in using energy. As we save more energy than we use on a daily basis, our energy begins to accumulate,

and our internal vitality grows. This improves our health, mental clarity, mood, and many aspects of our life.
In the way of martial application, during combat, our bodies can act akin to a whip, efficiently transferring energy to our opponents and dissolving the energy from our opponents.

The Path to Proficiency

This introduction to Tai Chi barely begins to scratch the surface of the benefits of this amazing practice. As many long-term practitioners will readily tell you, words can often not even come close to truly describing the many positive aspects associated with the correct practice of Tai Chi. Such must be experienced first-hand in order to be fully understand.
Tai Chi is more of a philosophy and a way of life than a simple exercise. When one truly starts to understand the essentials of its underlying teachings, one begins to live in a more mindful way, constantly striving to avoid negative emotions and to, instead, cultivate positive energy through our everyday activities.
For those truly interested in learning Tai Chi in its traditional form it is essential to find a good teacher. These are extremely rare and difficult to come by. If one somehow has the good enough fortune to be able to learn from a true Tai Chi master, one is still only half way there. To truly master the traditional art of Tai Chi, Tai Chi practitioners must also be very good students, carefully following their teacher’s advice and diligently practicing on a long-term basis. 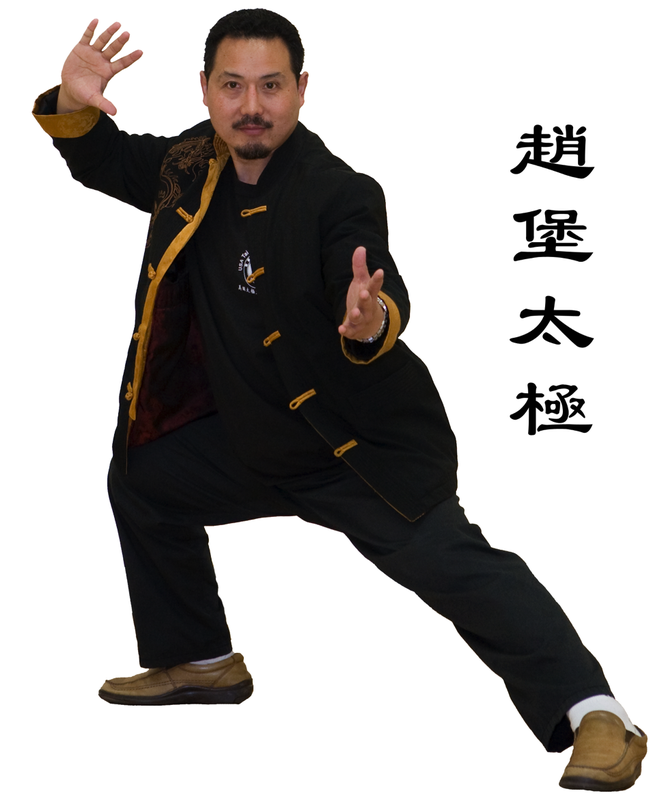 Master Wayne Peng
​
For those of us living in the Bay Area and interested in learning Tai Chi, we are very fortunate. Master Wayne Peng, the 12th generation successor of Zhaobao Tai Chi, provides personalized instruction to students throughout the Bay Area.
Master Peng came to the United States via the EB-1A immigration category, after having been recognized as a person of extraordinary ability due to his world-renowned prowess in Tai Chi. After 40 years of practice and numerous publications, Master Peng has gained a deep understanding of the Tai Chi philosophy. He demonstrates his mastery through push hands, free-style fighting, throws and various types of lock movements.
Due to his dedicated teaching style and high-level of mastery it is generally felt, among Master Peng’s more dedicated students, that we are in the “Golden Age” for learning the art of Tai Chi. We hope others will join us on the journey of self-improvement and self-mastery via the study of Zhaobao Tai Chi.
Address: 1472 N. Milpitas Blvd., Milpitas, CA 95035 Telephone: (510) 386-9378
Email: contact@zhaobaotaichi.com
For further details, please visit: www.zhaobaotaichi.com 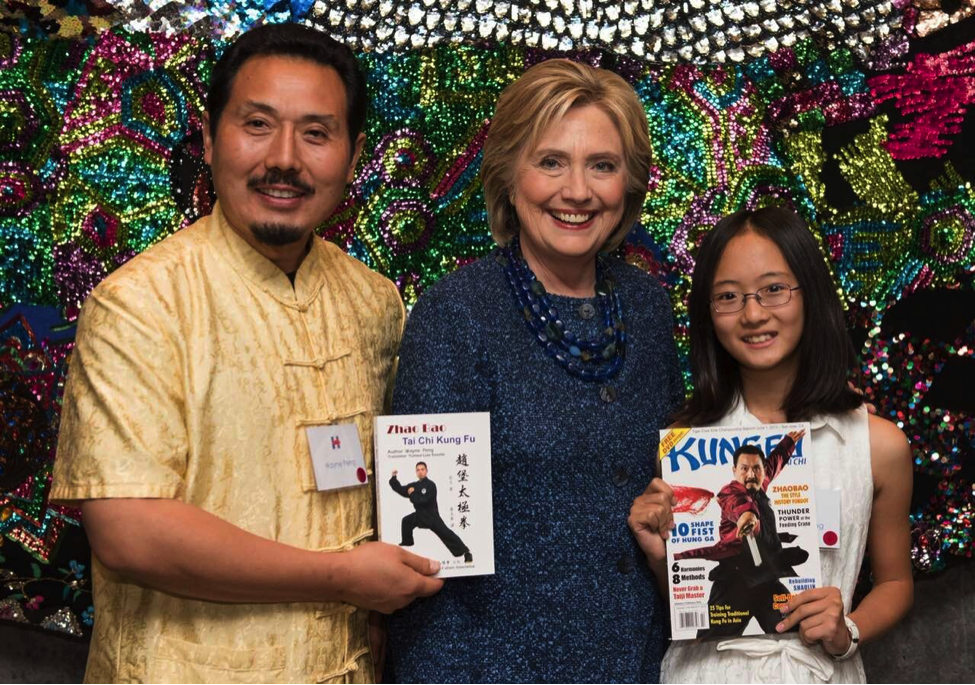